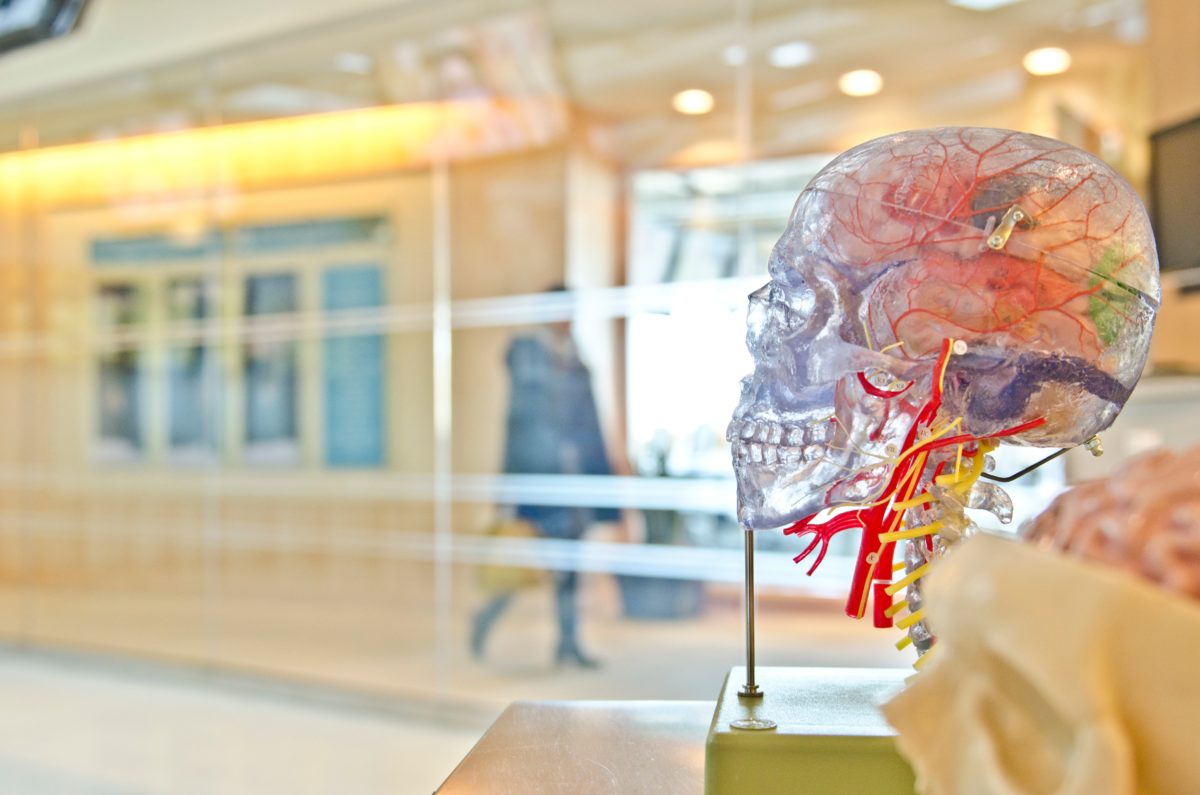 You’re driving down the street and a car comes out of nowhere barreling right at you! Oh no! Your body rushes with energy as you instinctively swerve out of the way, narrowly averting a catastrophic accident. Afterwards your hands shake and you alternate between extreme rage at that idiot driver who ran the stop sign, and terror at what might have happened. Welcome to the world of the amygdala, two almond shaped regions in the limbic area of our brains, right below our cerebral cortex. The left and right amygdala are in our temporal lobes, the parts of our brain on the left and right sides of our foreheads. The cortex is the outer portion of our brain composed of six credit-card-thick layers creased and folded into peaks (each called a gyrus) and valleys (each called a sulcus). The limbic area is the middle blob of gray matter below the cortex. The amygdala is a part of the limbic area nestled up against our orbital frontal cortex—the cortex just behind our eyes. Our brains are constantly scanning the environment, associating and anticipating. When we freak out with extreme emotion, the amygdala is pumping messages to the rest of the brain, screaming to do whatever the defensive program is. We might be programmed to run, strike out, laugh, cry, shout, freeze, look down, blame others, blame ourselves, or reach for greater compassion and deeper consciousness. People have infinite responses to the world—that’s what makes us so cool. The amygdala encodes extreme emotion memories, positive and negative. Our nervous systems constantly sense thousands—tens of thousands—sights, sounds, smells, sensations, thoughts and reactions. Instinct, habit, and consciousness focus us on just a few of them. Neuroscientists have actually determined that our brains choose seven plus or minus two things every few seconds, and create little stories from them to help us deal with the world. Our brain registers a threat, and — quick now — here comes the amygdala. In less than a tenth of a second our amygdala sends a rush of intense emotion through the body and jerks us into defensive activity, fight, flight, freeze, or deeper consciousness. If we’ve been trained for certain situations—like driving—those action tendencies spring instantly into place and we jerk the wheel in the right direction to save lives. Conscious processing takes up to a second  to catch up. The frontal cortex—the front part of our six-layer cortex behind our eyes and forehead—organizes conscious processing. Our frontal cortex is both wiser and slower than our amygdala. One second is not nearly quick enough to deal with a car barreling out of nowhere, so we need the instantaneous reflex our amygdala provides. You can see how our conscious self is always a step behind our emotional, reactive self. We don’t decide to be alarmed, angry, joyful, turned on, sad, or whatever, we discover ourselves to be alarmed, angry, joyful, turned on, sad, or whatever.

The human issue — the issue we have and other mammals don’t — is, “I’m mad (sad, scared, happy, attracted, anything). Now what am I going to do?” This is where conscious intent and focus of attention take over. This is human territory — even dolphins and chimps can’t function at, “I’m feeling, thinking, wanting something. Now what am I going to do?” The amygdala area of the brain does lots of things. When you consciously soothe yourself, integrative neurons connecting the frontal cortex to the amygdala tell it to calm down. These neurons are driven by the relaxing neurotransmitter GABA (gamma-aminobutyric acid). The amygdala is saturated with receptors for GABA. This is especially interesting because the major neurotransmitter used by the amygdala areas is glutamate, an excitatory neurotransmitter that gets us aroused to strong emotion and quick action. So, the amygdala reflexively excites us, but our conscious self can deliberately soothe us. If you have obsessive-compulsive disorder where you worry all the time, your poor brain has been trained to perceive innocent stimuli like spiders, distressed friends, or dirty dishes as major life threats. Your overworked amygdala jacks you up into fear—even terror—unnecessarily at what look to others like trivial stresses. “My lover is angry,” “I forgot to vacuum,” “I might not get enough sleep tonight,” “Maybe I’m a bad parent,” “Does my husband still love me?”  “Is this lump cancer?”…We all have our irrational—sometimes actual—fears. A single major catastrophe like a car accident or a rape can permanently train amygdala-based circuits to wire a specific alarmed emotion/thought/impulse reaction — a single traumatic event. In addition, prolonged stress like abusive—or even just poorly attuned or neglectful—parents, can train the brain-amygdala circuits to reflexively amplify and keep activating alarm, terror, rage, or grief.  Our brain is always associating and anticipating based on its previous programming—and if we’re programmed to perceive harmless stuff as scary, that’s what we’ll keep doing. Joseph LeDoux, the famous neuroscientist who is most credited for figuring out how the amygdala works (and is also a singer and guitar player in the rock-n-roll group The Amygdaloids), demonstrated persuasively that extreme terror or rage involving amygdala reactions creates what looks like permanent learning. Permanent? LeDoux believes the visceral responses to stimuli associated with the trauma—rushes of cortisol, urgent impulses to flee or freeze, and yucky, painful emotions—become so hardwired they never be completely rewired. Boston neuroscientist and PTSD researcher Besel van der Kolk disagrees. His research is demonstrating we can retrain traumatic learning toward compassion and acceptance. As a therapist who has participated in countless of such healings over the decades, I agree with Besel.

Now we get to two really cool, little known aspects of amygdala functioning—left/right hemisphere amygdala effects, and “It’s more complicated than people think” effects. The left/right hemisphere amygdala effects aspect is based on the fact that we have two hemispheres in our brains, meaning we have two amygdala areas. We have a left amygdala area associated with the linguistic, logical, linear left hemisphere. We have a right amygdala area associated with the non-verbal, spatial, emotional, right hemisphere. Our left hemisphere generates approach emotions like curiosity and seeking. Our right hemisphere generates avoidance emotions like fear, withdrawal, and “let me out of here!” This next series of studies blew my mind when I first discovered them: Michael Persinger at Laurentian University in Canada has researched sending low-level pulses of magnetic energy into the left and right temporal lobes. Over the years, Persinger and his colleagues have sat over two thousand subjects into a stained brown polyester armchair in a room that used to be a sound booth. They then strap on a modified motorcycle helmet, which they’ve engineered to direct low-level magnetic fields through people’s left and right temporal lobes. Folks with more sensitive left amygdalas had angelic visions and feelings of bliss and ecstasy during this process. These lucky individuals tended to report relatively happy life histories. To those of us not fortunate enough to have idyllic childhoods, self-development through meditation, spiritual practice, and interpersonal growth helps us create a sense of a happier life story—a life that makes sense in a good way. Such work also strengthens prefrontal connections with the amygdala areas. The prefrontal area is the cortex behind our forehead, the seat of self-aware consciousness, empathy, self-reflection, intuition, and morality. People who had more sensitive right amygdalas had scary—sometimes demonic—visions and horrific feelings of terror and rage when their temporal lobes were hit with the magnetic pulse. One guy ripped off the helmet and ran screaming out of the room (the kind of result that gets experimenters in a lot of trouble with their departments). These people were more likely to report negative early life experiences. All wisdom traditions maintain that self-reflection, meditation, empathy, and self-development make us wiser and kinder—we engage in these practices over time and our lives seem happier and more meaningful in positive ways. Neurologically, these activities result in the frontal cortex literally thickening and generating soothing brain connections to the amygdala. With development and self-reflective work, we can train our left amygdala to be more sensitive and bias us towards joy, gratitude, and happiness.

The “It’s more complicated than people think” phenomenon is reflected in a 2000 study by Dr. Adolph published in Nature and Neuroscience where he wired people up to fMRI’s and had them remember scenes that evoked extreme joy, sadness, anger, and grief. There were two fascinating findings: I heard this study quoted at a conference on a panel discussion, and the panelists—mostly neuroscientists who accepted on faith and current research that extreme negative emotion had to centrally involve the amygdala — all gasped in unison, completely blown away by this finding. The conclusion I draw from all these studies is that the brain is the most complicated organ in the universe, and we have a lot to learn about emotion and how the amygdala generates and soothes extreme states of arousal like fear, terror, rage, joy, exultation, and transcendence. If our conscious focus and intent keeps leaning towards deeper consciousness and greater compassion, we constellate neural networks that become hard wired if we keep up our practice. If we can maintain such practices for a month, stem cells in our brain divide and the daughter cells become integrative neurons that hard-wire the new networks. When we do this with self-soothing, three months later the new neurons are fully mature, supporting soothing GABA circuits from our conscious self (based in our prefrontal cortex) to our amygdala. Every time I review all this research, I’m reminded how important daily meditation practice–you know, the ten or twenty minutes you can’t seem to consistently find time for–can be for happiness and health. Similarly, I’m reminded how useful karma yoga of dedicating each thought and action to the highest good can be for amplifying compassion and equanimity. When I do this, I imagine my amygdala thanks me. You might want to try regular meditation and karma yoga too. I’ll bet your amygdala will thank you! Image Credit: Jessie Orrico on Unsplash.
Share8
Tweet
Buffer
Share
Flip
Reddit