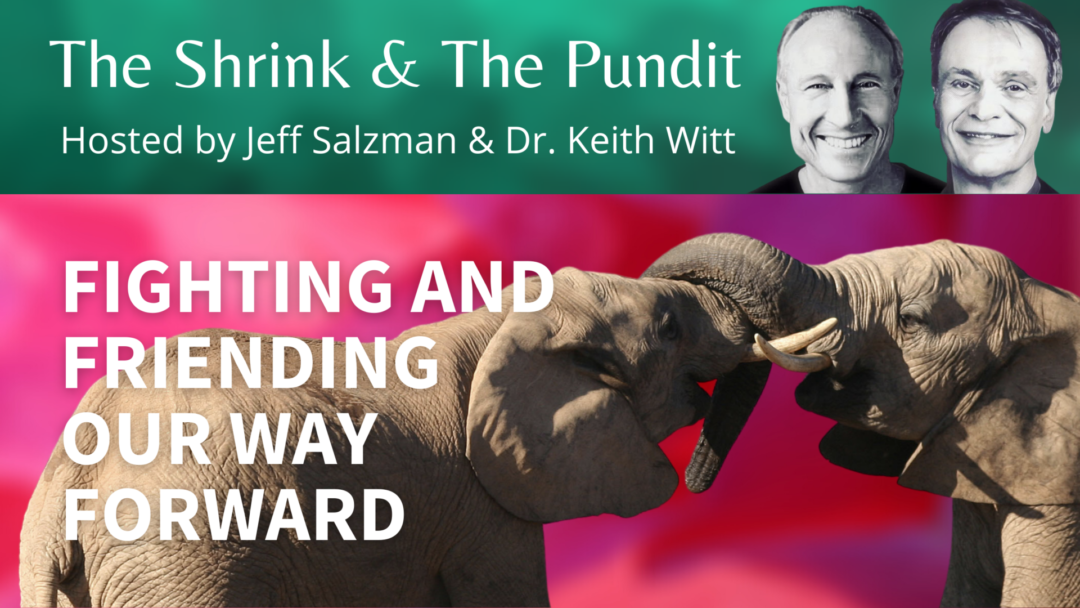 The Daily Evolver · Fighting and Friending our Way Forward

Humans are intensely social. If you look at most human interactions, you notice that in relationships we are mostly either playing or fighting.

Playing is cooperative activity with an agreed upon set of rules. Sometimes play is pure fun, and sometimes winning/losing dynamics are painful, but any engaged activity under an external set of rules is play.

Fighting is dominating the other, with little or no regard for a shared set of rules—might-makes-right dynamics. Three outcomes of fighting are domination, submission, or a shift to cooperation (play).

The playing/fighting dynamic is true between people or between groups, nations, or cultures—playing cooperatively, or fighting to dominate with no shared rules of engagement. The drives to dominate are arguably humankind’s original sin. The capacity to channel impulses to dominate into mutually agreed upon contracts (sets of rules) transforms fighting into playing, and is a human superpower.

This also happens in our interior relationships with the different parts of ourselves—they play in harmony or are in inner conflicts (internalized conflicts are what Freud called neuroses). The fighting/playing dynamic is played out through all psychological processes.

All living processes exist in rhythmic states, often created by opposing forces in the individuals, groups, or morphic fields. Within species opposing forces create conflict, which resolves into either cooperation or one individual/group/culture dominating another, with or without agreed upon rules. We see this in mammalian play—engagement, into apparent conflict, regulated into cooperative behavior, or escalating into a fight with one individual dominating another. This dynamic of tension resolving into either cooperation (play), or escalation into domination or constraint (fight) is the subtext of most human activity.

We humans can coregulate to social engagement and play brilliantly when we feel safe and positively connected. We coregulate to connection and harmony in play, and coregulate to disconnection and fear/anger in fight. Humans who can’t self-regulate fight to play tend to negatively amplify emotions, thoughts, actions, and beliefs, leading to more fighting. When a person or group becomes too different and alarming, collectives are drawn to pull them back to cultural norms either through persuasion (cooperative/play), or by coercion (external constraint/fight).

The polyvagal system, the adaptive unconscious, and the world all interact for better or worse. If you and I are attuned, we coregulate each other with positive regard and empathic interest—so we can play. We help each other best through cooperation and play.

Playing and fighting are much more difficult and evolutionarily complex with conscious self-awareness. I’ve observed that it usually requires integral altitude moments (felt appreciation for multiple points of view and radical self-awareness) to be able to feel the other’s commitment to fight, constrain the other as compassionately as possible, and then move towards cooperation and play.

Cooperation the most powerful human superpower

The most powerful human superpower is cooperation, evolution is much more about cooperating than competing. Social engagement (persuasion/play) is usually the first human response to energy imbalances—humans generally prefer cooperation/persuasion to conflict.

Shame emotions regulate us towards cooperation

Most humans feel shame emotions when violating standards of respecting or caring for others. Shame and guilt motivate us to adjust to social engagement. That being said, human fighting threatens the survival of our biosphere.

Sometimes individual or cultural biases or blindspots can amplify into objectifying and exploiting others for protection, release, or profit (coercion/fight that refuses cooperation/play, insisting on domination). This normalizes objectification and violence towards selected others.

We have multiple counterbalancing instincts to dominate, to join into groups, to privilege our groups, to defend our groups against threats, and to cooperate with other groups. Any time a defensive instinct dominates social engagement instincts, cooperation becomes threatening and pathology is often not far behind.

When an individual or group is threatened, the defensive instincts are to resolve the threat—often first with social engagement/play. If social engagement fails or is unavailable because we are conditioned to not cooperate with other individuals or groups, we move to fight/flight reactions. We’ll choose coercion/fight if we can’t escape (flight). Fighting with rules can be unpleasant, but ultimately is a form of play. Fighting without rules is power relating where one must physically/psychologically dominate the other to resolve the conflict.

Imperialist/authoritarian/rigid/threatened individuals or groups can be based in domination/fight, and systemically resist cooperation/play. Total submission of the other is the only acceptable response when cooperation is forbidden. This has been increasingly the position of authoritarian leaders and populist parties like the ultra-right wing of the U.S. Republican party.

When faced with another individual or group threatening or coercing us, and apparently unavailable for cooperation/play, we are being invited evolutionarily to provide external constraint to regulate back to cooperation/play.

When an individual or group receives effective constraint, and then are offered cooperation/play, they often respond with cooperation/play, where greater complexity can arise. We see this with children receiving compassionate constraint when acting out, and with imperialistic cultures like Japan and Germany in the first part of the last century needing to be externally constrained before they could join into a collaborative world order. In both cases, the push on one side for domination/fight is an evolutionary request to the other side to respond with constraint, then cooperation/play.

Occasionally toxic cultures learn how to temporarily freeze history and establish autocratic states based on power, terror, and social control. North Korea is a current example, and 19th century Japan an historical one. Humans rebel against such social structures, instinctively craving human rights. Eventually the human collective, driven by the evolutionary forces towards cooperation, care, fairness, and greater complexity, wear such toxic cultures down—by means of external constraints, from economic to military, and cultural constraints by presenting members with alternative ways of being. Eventually, such rigid autocratic states become more available to collaboration/cooperation/play.

The compulsion to dominate as an unconscious plea for external constraint

As tendencies to fight/dominate grow, they pull distress from other people and cultures, creating conflicts. The resolution of these conflicts becomes

We crave care, fairness, and play

We humans are intensely social. When we perceive others damaging the collective, we are moved to respond, if only with our approvals or disapprovals. These approvals and disapprovals are forms of external constraint, which we all employ daily. They often result in cooperation back to social engagement (play). We take these interactions for granted since they are ubiquitous. This rhythm of a little tension regulated back to social engagement through rules and shared understanding, is the essence of play from infancy onwards, and the cooperative birthright of our hyper-social species. When faced with disruptions in this rhythm, we experience the disruptions as requests to constrain the other back to fairness and caring.

We are always relating with and within our physiological states and our many selves. Interiorly we are often playing or fighting with ourselves. Regulating interior fight to interior play is a beautiful and productive yoga, that mirrors similar interpersonal processes. As above, so below. As I relate to you, so I relate to me.