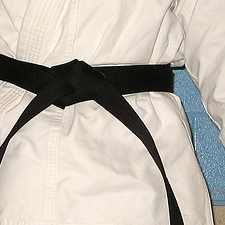 I first meditated in 1965, kneeling in a line of karate practitioners facing our sensei (teacher), John Flaig. He was the only black belt in the room. Opposite him, the brown belts and less senior white belts were lined up in descending order, with me, the most junior member, at the very end. After exchanging deep bows, John told us to relax into emptiness and openness, and I did, surprised at the expansive pleasure I felt from just closing my eyes and focusing on breath, body, and energy. This was a turning point in my young life. I desperately wanted the skills and confidence that I believed would develop from being an accomplished martial artist, but was frightened of the violence and pain that came with the territory. Shotokan Karate is a traditional Japanese “hard” style that involves sudden, violent bursts of concentrated aggression. There is a military intensity to the training that requires practicing powerful techniques facing screaming attacking opponents. I had attended once when I was fourteen, and had been sufficiently intimidated that it took me a year to return. Oddly for a 1965 teenager, I was especially attracted to the meditations we did before and after every class, and continued meditating before and after training through subsequent decades of martial arts study. Sitting at the end of that line, I knew something wonderful existed in the Shotokan world, and I resolved to do what it took to embody this beautiful and frightening art. Three and a half years later I was a black belt teaching a group of eager practitioners—guiding my students into emptiness and openness at the beginning and end of each class. Resolving to learn karate and eventually earning a black belt were turning points, significant events that propelled my life onward. We all live at the center of an unfolding universe with us as the main player—the hero—in a lifelong myth. Some events—rites of passage, decisions to change, catastrophes, marriages, funerals, seminal relationships—have especial mythic resonance. A couple of months ago I had a similar event, but more subtle and less physical than my karate adventures. Three or four times a week I practice a meditation that travels many places. At one point I direct my attention backwards in time to all the Keiths that have existed, and then back further through blood kinship to the beginning of life on earth, and then back further to the Big Bang. I send love, wisdom, and intent to support the evolutionary process down this channel but—till recently—never comfort, guidance, or reassurance specifically to all those past Keiths. While meditating several months ago I decided to send more personal messages back through time to all my previous selves. “Your anxiety is irrelevant and your worries will seem trivial later.” “Enjoy each moment.” “Be grateful for everything that is arising.” “You are God’s body, mind, voice, and hands.” “You are connected to everything past, present, and future.” It felt warm and comforting to direct my attention this way, and it has become a staple part of my meditation practice. I suspect it will continue for the rest of my life. About three weeks later, in the middle of meditating, I began to feel waves of future Keiths transmitting this message back to me. I realized—let in—that in thousands of meditation sessions in the future, I’m going to be directing comfort and wisdom back to me at this moment. My sense of time looped and I felt a vast joy. Now I frequently feel the waves of positive intent from future Keiths practicing this exercise, sending these messages back through time. They sing to me, “Let go of fear. Be grateful. Embrace unity, embrace mutuality, surrender to your deepest inner voices, allow change”—they echo the refrain from Van Morrison’s classic song, Take it where you find it, “Change come over, change come over…” I feel more powerfully how life is dynamic, and that embracing changes while reaching for the highest good maximizes meaning and quality of existence. These events feel like turning points that have directed me, like my study of Shotokan Karate guided me towards meditation and the Way of the Warrior. I believe our human self-awareness—existing simultaneously in the past, present and future, and always creating stories about our experience—generates turning points and peak moments. We can be more or less aware of them, and encourage or discourage them when they show up. Mindfulness practices help us surrender to the evolutionary flow towards deeper consciousness and greater compassion, and—eventually over time—create peak experiences. Such peak experiences—if embraced and acted on—can create transformative moments where everything was one way before, but different after. I’ve been meditating for 46 years, but never stably felt future selves comforting me till that pivotal moment in my practice. As I felt myself part of an ongoing circuit of reassurance and wise guidance from present to past to future to present, a light when on inside me, and fear palpably diminished. I sense a deeper relationship with Keiths in the future as they do with me—I know it, I can feel it. We are born heroes in our personal myths and such moments come to all of us, whether we identify them as such or not. Contemplative practice makes us more open to and aware of turning points and peak moments, and allows us to amplify and extend them into life transformations. I encourage you to practice meditations. There are lots of them (see Blogs #22, #29, and #37). As you practice, you’ll eventually find yourself in the midst of turning points and peak experiences. When they show up, I suggest you honor them and include them in your life—they will add magic and direction to your personal myth, and strengthen and guide you, the Hero.
Share8
Tweet
Buffer
Share
Flip
Reddit